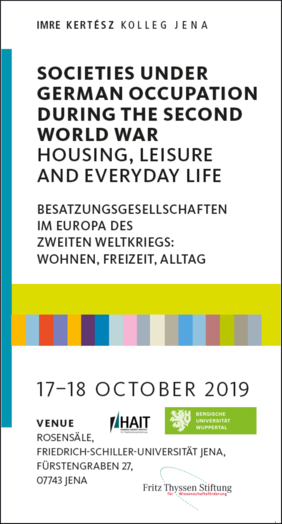 This is a joint conference between the Imre Kertész Kolleg at the University of Jena, the Hannah Arendt Institute for Research on Totalitarianism at Dresden University, and the Chair for Modern and Contemporary History at the University of Wuppertal. The organizers thank the Fritz Thyssen Foundation for the generous funding of the conference.

During the Second World War, between northern Norway and the Greek islands in the Mediterranean, and between the French Atlantic coast and territories deep in the interior of the Soviet Union, around 230 million people found themselves living under German occupation. Whereas the actual structures of occupation and direct repression have been well researched in the historiography, further issues concerning everyday life have received less attention, particularly from a comparative European perspective.
These generally neglected aspects of an extra‐ordinary daily life under occupation form the focus of this conference. Its point of departure is the finding that occupation is always to be considered as a form of foreign rule, resulting from war, which is accompanied by disenfranchisement and a loss of sovereignty on the part of the occupied. Furthermore, occupation is characterised by the physical and/or regulative presence of the occupiers, which leads to the emergence of an asymmetrical relationship between the occupiers and occupied societies.
Against this background, the conference will explore the interrelatedness of the various interactions upon which the “occupiers” and the “occupied” were fundamentally reliant, and which shaped everyday life in manifold ways. With a view to both the Jewish and the non‐Jewish members of the occupied societies, the conference therefore investigates the strategies which were developed in order to come to terms with an unfamiliar and confusing situation. Particular subjects of interest will therefore be questions related to accommodation, medical assistance, childhood and leisure.
In its conception and focus, this conference therefore aims to provide an important contribution towards the de‐typification of occupation by discussing it in a comparative European perspective against the background of a daily existence which was constantly threatened and shaped by violence.