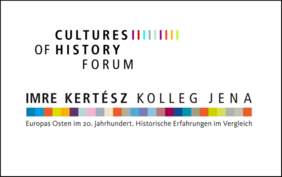 The Imre Kertesz Kolleg’s Cultures of History Forum aims to make use of the anniversary year of 2019 with its wave of renewed public engagement with 1989 to take stock of new developments in public discourse over the most recent past.

The years 2019 will see a plethora of public events across the former Eastern bloc countries that commemorate the end of communism and the establishment of open, democratic regimes. Once again, we will see an outpour of speeches and commemorative gestures by officials pointing to the achievements of the democratic revolutions – and we will see controversy and contestation over contrasting narratives and memories. While for many people ‘1989’ still represents a positive symbol of people’s yearning for freedom or self-determination, alternative narratives of “unfinished transition” or new injustices are also part of public discourses. Previously dominant collectivist narratives are slowly giving way to a more varied and complex picture of the social and cultural changes that occurred during and after the peaceful revolutions. Moreover, new generations of artists, writers, theater and film directors as well as public historians and curators have entered the stage to take active part in the public conversation (and negotiation) of the revolutions.

The Imre Kertesz Kolleg’s Cultures of History Forum aims to make use of the anniversary year of 2019 with its wave of renewed public engagement with 1989 to take stock of new developments in public discourse over the most recent past. We invite scholars of public history and cultural memory to send us critical analyses of recent museum exhibitions, art and documentary films or theater plays, novels or memoirs, commemorative rituals or other forms of representations of the democratic revolutions and their legacies. By focusing mainly on popular culture we want to consciously step beyond issues of memory politics or academic discourse and, instead, draw attention to the multiple ways in which public representations of the past allow for new ways of participation and self-expression in the production and negotiation of historical knowledge. In this sense, we ask contributors to not only look at what is being produced/ performed, but to take a ‘look behind the scenes’ and analyze the very process of historical knowledge aestheticization and negotiation in the public sphere. Among other, contributions to this project should consider the following questions:

•    Who are the actors involved in the production of cultural representations and what is their perspective/agenda/motivation to engage with the past?
•    What are the technical, narrative and aesthetic tools used for presenting/staging/narrating the story of the democratic revolutions and transition experiences?
•    Who are the audiences of contemporary public representations of 1989 and what is their role in the process of historical knowledge creation?
•    How much is today’s remembrance of 1989 determined by what came afterwards, and how much by what was before? What do current rituals/representations tell us about society today?

We welcome papers that focus on single case studies as well as those that consider a series of events or look at historical representations in comparative perspective.
Please send an outline of your planned contribution (of about 500 words) as well as a short biographical note indicating your current affiliation and area of research to Dr Eva-Clarita Pettai latest by May 15, 2019. The outline should provide a clear sense of both the structure of argument as well as the sources of your planned study.

Authors of selected papers will be invited to come to Jena for a special one-day workshop on October 4, 2019 at the Imre Kertész Kolleg, where they are supposed to present a synopsis of their findings and discuss other contributors’ papers. In order to facilitate this discussion, all contributors are asked to submit an advanced version of their paper (max 5000 words) latest by September 15, 2019. The draft papers will be circulated among all workshop participants.
Contact: Dr Eva-Clarita Pettai